I like to talk quite a bit about asking questions of your team, rather than giving them the answers, and solving their problems for them. The reason for that is, questions is what a highly effective leader relies on.

1. What Questions Do You Ask?

When I learned, and decided to stop trying to solve problems for my team members, I always had the same question to whatever their question was. My first question was always, “What’s the problem?” My team would get confused by that question because they think they have just told me.

But, asking “What’s the problem?” made them think again and dig a little deeper. I wouldn’t stop asking that question until they had thought a little deeper, and come back to me with the actual problem.

A lot of the time, my question should have been, “Who is the problem?” because the problem did usually start with the person seeking help. The only real problem was, they didn’t know that they were the problem.

After a while, the team knew that if they came to me with a problem, I would ask them the same question every time, “What’s the problem?” So, they did their thinking beforehand, and when they did that, they realised that they didn’t need to come to me anymore because they had already solved the problem.

I must admit, I did find it quite fun when the team would come to me with problems, and I would ask them, “What’s the problem?” because I would go and observe them thinking deeper about the situation, and it gave me a sense of pride.

It made me feel good that I had prompted my team to think a lot deeper and solve their own problems. It was a very simple, but very effective thing to do. 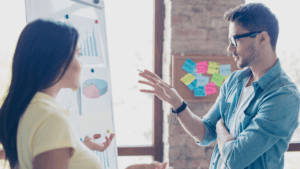 When I was a leader of a team in the railway, we were responsible for solving train problems, especially when they broke down in service. So, if I saw a team member trying to solve a train problem while sitting at his desk, I would change my question from, “What’s the problem?” to “Where’s the problem?”

If they were going to get to the root cause of an engineering problem on a train, wouldn’t it be better to be exactly where the problem was?

When I asked the team that question, they knew immediately to leave the office and go to where the problem was. I used to do this myself when I was a young engineer, but in those days it was rare you could get out of the office because the manager always wanted to keep his eye on us.

3. Casting Your Vision For The Future

However, a highly effective leader is very visual in how he/she thinks. That is why casting a vision of the future for the team is so important.

They also know how important it is to see a problem, not just rely on spreadsheets, data, and information being told or sent to them. Whenever I got the opportunity to see a problem, I knew I had a much better chance of solving it.

So, if you have a team member who is responsible for a problem, then you need to give them the best chance they can at solving it. That means letting them go to the problem. Don’t keep them in the office so you can keep your eye on them. Give them the freedom, and the tools to solve their own problems, wherever they may be.

If you don’t give them this freedom and opportunity to solve their problems, then you will ultimately be responsible because you are responsible for your team member.

I liked to ask my team that when they think they have solved a problem, they should report back to me with a report or presentation. This would give me the opportunity to ask more questions, and get my team thinking even deeper, and assure me that the team have done everything they could.

The type of question I would ask during a presentation are, “How do you know that the problem is solved?” If they could answer that question well, then I was satisfied. However, if they answered me with, “I just know.”

Then that would not be acceptable. Especially if they had seen the problem and they were just relying on information passed to them by somebody else.

There are far too many big decisions being made in organisations that are based on poor data, poor information, and hearsay. They are the main problems in a lot of organisations throughout the world.

Big decisions need to be made together as a team, and based on actually seeing and solving problems in the right way. We cannot make decisions based on gut feelings, or information we found in the system from a year ago.

Asking questions until you cannot ask anymore is the only way you can be 100% sure everything has been done to solve a problem. 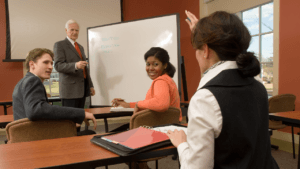 As I have said before, when you ask your team questions, and you are helping them to solve their own problems, you are showing your team respect.

Earlier, I told you that one of my old managers wouldn’t let me go to see problems on trains in service because he wanted to keep his eye on us. Well, this same manager would often ask us questions too. He would often ask, “Why are you doing that Tom?” or “Who told you to work on that?”

Whenever he would ask those questions, I would feel nervous or intimidated because what he actually meant was, “What you are doing is wrong.” Or, “I don’t want you to work on that.” So, they were asking the wrong questions.

When I started to ask questions, I had a completely different outlook. I thought like a child did. Why? You might be asking. Well, if a child asks you, “Why are you doing that?” they do not want you to stop what you are doing, they actually want to know so that they can learn from you.

That is exactly the frame of mind I have. I actually do want to learn from my team. I have no interest in getting them to stop what they’re doing, or telling them that they are doing it wrong.

When I explain to my team why I am asking them, “Why are you doing that in that way?” they are a lot more relaxed and open to explaining it to me. They know that I do genuinely want to learn from them.

It’s a great feeling when you begin to see your team asking their teammates the same kinds of questions, and because they genuinely want to learn. They do not want to stop them from doing anything, or blame them in anyway.

Problems are there to be solved. But, how do you solve a problem? Should you first see the problem before you can solve it? Or, should you work from information and data that you got from somebody else? It’s your choice.

16 thoughts on “Do You Solve Problems For Your People?”