How you treat your people is extremely important if you want your team to be successful.

There has probably been a time in your life when you have heard the truth from someone, and it hurt. It’s probably hard to hear, but it hurt you because it was supposed to hurt you. I know the truth has hurt me on a number of occasions.

1. How Do You Feel At Your Current Place Of Work?

Do you feel that the organisation you work with respects you and all of your colleagues? Do you receive leadership development training, either in a one off intensive course or an ongoing programme? If you don’t, then your organisation does not respect you or your colleagues.

Everybody in the whole organisation should be trained in leadership, personal growth, character development, communication, and productivity.

Organisations that have low engagement with their people, and a high turnover, do so because they do not develop them. This is the norm for most organisations throughout the world, which is really unfortunate and has to change.

They must learn from organisations who do have respect for their people, and provide them development training. Especially training in developing the character of all their people, not just the senior leaders.

When I was engineering technical manager for a UK train operator in London, I had a big team that were based in London, Essex, and Norwich. So they were spread around the south and east of England. I had a team of managers who I led, and they led their technical teams. 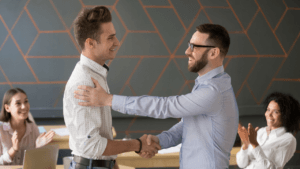 This was Andy’s first job as a manager. Before he was systems engineering manager, he had been an engineer. He was chartered like me so was very experienced in the world of engineering.

Unfortunately, Andy wasn’t doing as good a job as I thought he would. He was a great engineer, so naturally I and everyone else thought he would be a good leader. But this wasn’t the case, and a lot of people were noticing, mostly me.

When I addressed this with Andy, he retaliated against me. He felt like I was singling him out, and brought up mistakes that other people were making, rather than focussing on himself. I didn’t expect this retaliation from Andy, but it was something I had to deal with.

After we ended our initial conversation, I went away and thought long and hard on how I could help Andy, and how to resolve this.

I spoke with my boss, and we decided that we would bring in a consulting company who could help Andy with his leadership skills, and help him organise his team better. We wanted to see better results from him and his team, and we thought this help would be the answer.

So, when the company came in to meet the systems engineering team, I could feel that there was an atmosphere, and not a good one.

The consultants presented to us what they were going to do to help, and everyone kept asking awkward questions and saying things like, “We’ve seen this all before” and “This is money for old rope,” and the old favourite “This will never work.”

After the meeting ended I took the consultants aside and we agreed that this was just the first day, things will get better as we go through the new processes and training. As you may be able to imagine, things did not get better. They got worse, much worse in fact.

I was getting criticism from my boss, his boss, the other engineering leaders, and it kept piling up. I couldn’t figure out why Andy and the systems engineers were behaving like this. I thought I was doing a good thing by bringing in consultants to help them.

There was even an occasion when one of the consultants phoned me up to tell me that Andy had verbally abused him, and insulted him. I couldn’t believe what was happening. So confronted Andy with this accusation and he denied everything.

I didn’t know what else to do. I let everything get on top of me and I even had to take time out with stress. It was during this time out that I learned why the team reacted with such retaliation to the consultants.

Do you know why? 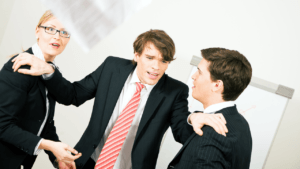 3. Involve Your People At The Right Time

I hadn’t involved the systems team in bringing in the consultants. I hadn’t asked their opinions, their ideas on how we can improve, and I hadn’t received their buy-in. I didn’t show them or Andy the respect, and that I wanted to help them develop. I hadn’t thought about character development, I only thought about competency development.

To be honest I didn’t even buy-in to bringing in consultants myself. I just went with it when I had the discussion with my boss. I was so disappointed in myself, and really got down on myself. Andy was eventually moved out of the systems engineering manager role and was replaced. It was my boss who made that move.

Lack of communication, lack of engagement, blaming, resistance, and bad mouthing from your team is a sign that you as the leader are lacking in character. Your character is weak, and you must work on it to make it stronger.

The starting point for this is to show respect to your team, and your team will in turn respect you back. By growing yourself first and developing your character first is how you become a highly effective leader.

If you make character development of your team the norm, then your influence will increase around the organisation and other teams, departments and leaders will follow your example. Character development and respect for Andy and the systems engineering team is where I should have started.

The more successful they are, the more the influence of the leader and the team will increase into areas that they previously didn’t have any.

It’s not about the results that you get, or the money you make for your organisation. It is about the lives you touch and the positive differences you can make in people that really counts.

20 thoughts on “Do You Respect Your People?”