Having empathy is seeking out opportunities to help others. Think of yourself less, and think of others more.

If there is one thing that I have learned over the years when I want to help a person, in any capacity, it is to “Have Empathy.” What does that mean? It means to seek out opportunities to help others. How do you do that? Well, you think more about others than you think about yourself.

However, it doesn’t mean that the needs of the individual are wiped out completely. They still count. You must still value yourself, just be aware of the team’s needs and their value a bit more.

During my apprenticeship I worked with many talented engineers, but there was one that stood out for me. His name was Tony. He stands out, not only because he was an excellent engineer, but because he showed a lot of empathy.

He was about 10 years older than me so he had a lot more experience, and knew the job a lot better. We worked on building the car engine assembly lines together, and he helped me lots, even when I didn’t know he was helping me.

He had this way of making you feel like it was your idea, even if it was his idea really. His objective was to make others feel good.

2. Being Deliberate With Empathy

Tony was very deliberate about being empathetic with his teammates. He knew that by helping others, the team would work together a lot better, and we could beat our expectations. When Tony came to work, his focus was to use his own experiences, and skills to help us. 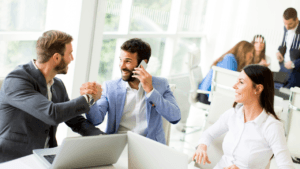 Even when it came to opening doors for people, or picking a tool or something up for another person, Tony was right there. Every day he would give me a lift home from work because in those days I couldn’t drive. I remember talking about Tony to my Dad, saying I wanted to model him as an engineer, but also think of others like he did.

Tony loves to help others, and think of himself less because it was instilled in him. He has the heart to think of others, and help them where he could. In the words of someone from Liverpool, “He was a lovely lad.” You might be thinking at the moment that you don’t have any empathy, or think of others as much as Tony does.

But, don’t worry. Empathy can be learned. I had to learn it. You may have gathered that, due to the stories I’ve told in my other articles.

I remember walking past the notice board at our place of work, and I saw a notice that Tony had put up looking for people to play football (soccer) on a Wednesday evening. He needed 12 players as it was 5 a side, and each team would have a substitute.

I was first to volunteer because I loved playing 5 a side, but most of all because Tony was organising it. Within a day or two, we had all the players we needed, so the next Wednesday we were playing 5 a side football. It was a great way to keep fit, and it was great for socialising outside of work.

That was what Tony put on the notice board. He was thinking of helping people keep fit, and it was good for team building outside of work. I wasn’t the fittest at the time, so I played in goal for the beginning.

Tony would always replace me because he knew I could get fitter by playing. He was thinking of my fitness more than his own. He did this with all of the players too, not just me.

So, if you’re thinking of ideas for team building exercises then team sports is an excellent way to start. A lot of teams go for nights out to the pub or a bar. This is great, but if you’re doing activities where you need to work as a team that is different to work, then it is much better.

When we played 5 a side, it is a very fast sport, and we needed to help each other to score a goal, or defend our own goal. Then afterwards, the social side, we had a lot to talk about. We talked about the football, and also how we can improve things at work.

That was Tony’s thoughts when starting the 5 a side. Fitness, team building, and brainstorming. Again, he was being empathetic to our needs as a team. He knew that to improve things we needed to brainstorm with each other, and the best place to do that was outside of the working environment.

One idea that we wanted to pursue was, instead of working individually when building the assembly lines, why not try working in two’s. Tony asked us what we thought of it, and as part of the brainstorming we drew up all of the pros and cons.

There were more pros than cons when we were finished, so we made the decision as team to trial it. Well, it worked. The guy I paired up with was called Steve, he was about 4 years older than me. So he still had a lot to learn, but Tony thought that two younger heads working together might work well.

Guess what? We worked really well together. The best thing about working in a two was the help we gave each other. That was Tony’s thinking when he thought of working in pairs. He knew it would force us to help each other, and move the team forward.

For the rest of my time during my apprenticeship, and the few months following, I always worked in a pair when building an assembly line. All down to Tony’s initial idea, but then the team’s brainstorming of that idea. So, to this day, I always encourage engineers to work in two’s whenever it was practical. 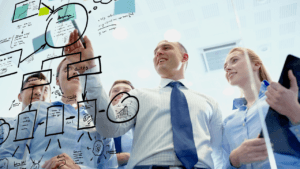 Sometimes we have to work on our own, but when we are surrounded by the team then to help each other, work in two’s was my philosophy.

Most of the time it worked. But, there were times when people didn’t get a long, or they preferred to work on their own. You might be one of those people now, but believe me, working alongside another can only be good for the team overall.

I bring you back to the story of Phil when we worked in London for Siemens, in my article “How To Connect With Others“. I wanted him to help our new team member Freddie by working with him, and sharing his knowledge with him.

He didn’t want to do it at first, but over time he came round to it with a little encouragement and leadership. If you have any team members like that, then all you need to do is share what you are learning in this article and they will come round to the idea of working alongside their teammates and helping each other.

It is the only way the team can achieve great things.

I wouldn’t have thought like this if it weren’t for my mentor Ron, but also having the role model of Tony in my apprenticeship. I changed my thinking a bit when I got older because of the people I was working with, I though receiving help was a weakness.

But my mentor gave the lessons, and that is when I started to think of Tony again. Unfortunately, I only got to work with Tony for 4½ years because the company we worked for went bankrupt, and we were all made redundant.

Following that Tony set up business for himself and I went elsewhere, but I will never forget him. He had a lot of empathy, and because of that he was a highly effective leader. Everyone in our team trusted him.

He was a very valuable team player but he cared more in making us valuable. That is what empathy is all about. He used his own skills and talents to benefit others, not just himself.

12 thoughts on “How To Have Empathy With People”