I was working as a consultant project manager for London Tube Company in early 2019. My role was to manage the overhaul of the fleet of trains that ran on the District Line. The team I had consisted of 9 consultant engineers who had never worked together before, or even met each other before.

The role of the engineers was to validate all of the overhaul instructions, vehicle maintenance instructions, and bill of materials, tooling, and facilities. It was a huge project that was planned to last a year.

The validations that our team were required to complete was massive, so I had to bring the team together and motivate them. Otherwise the project wouldn’t last a year, and our consultancy wouldn’t be offered further projects. There was a lot at stake for us to pull off.

It took about a month to bring all of the 9 engineers onto the project, and then a couple of weeks to delegate the first phase tasks to each team member. 4 of the engineers were contractors, and the other 5 worked for the same consultancy I did.

1. What Is The Goal You Have For Your Team?

So, at first there was a little bit of us and them between the contractors and the consultants. This made my position even harder, because not only did we not know each other, there were also people who didn’t like each other right from the start.

The goal I set for the team was to complete our tasks on time to the best of our ability. But, the real goal I set was for us to get a long and enjoy working together.

Not everyone bought into that goal right from the beginning, so I arranged a social get together to try and get to know each other first before we really got stuck into the work.

We went paint balling together, and then we went for dinner and drinks later in the evening. It was a really good day and we all got a long great. We talked about our previous jobs, our families, friends, told stories, but most of all we were happy to work with each other from then on. It was a huge success.

We went back to work on the Monday morning with a new attitude following our successful social encounter. We were ready to work as a team, and help each other. 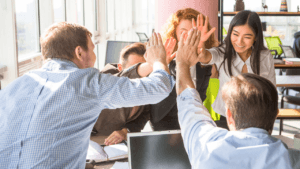 2. How Much Does Your Team Rely On You?

The first week of starting the project for real, I did a lot of observing. I wanted to see if the team were relying on me, or relying on each other. I advised the team that I would not be a micro-manager, and be on their back each day looking for updates.

They had the autonomy to make their own decisions and work with the client as they saw fit. I tried to ask a lot of open questions that would enable them to think for themselves and come to their own answers.

By asking questions, I was not telling them what to do, they were telling themselves what to do. I found it interesting because they didn’t realise that’s what they were actually doing.

At the end of the first week, the team worked well together, and without any of my input or direction they had already drew up a plan for the second week. Mark and Dean were two members who worked for the same consultancy as me, and they took me through the plan.

I could tell by their voices that the plan excited them, and I could tell by how they came across that they were both leaders. I saw them as being the leaders when I wasn’t there.

I didn’t tell Mark and Dean that I wanted them to be the leaders, I wanted to see them lead naturally. So in week 2, I did a lot of observing again. This time I wasn’t observing if the team got a long, because they obviously were.

I wanted to see who the leaders were. At first Mark and Dean took charge, and because of their leadership they inspired the rest of the team to lead too. It was amazing to witness a team building themselves into a team of leaders.

Even though I was responsible for this team, it was beginning to feel like I didn’t even need to be there anymore. Which is a great feeling.

I had set the foundations and the goal that we should be a team who got a long and worked well together. Now this was happening, I just needed to assist the team whenever they needed me.

Mark and Dean were learning every day, and every day they were inspired from within because they were making things happen on the project without needing me to motivate them.

The rest of the team were inspired too because they were also making things happen. All I had to do was check on progress with them every Friday, and that is when they took me through the following week’s plan.

Every week when I checked on the team’s progress, it was great to see that everything was on track, and they were even ahead of schedule on some tasks.

During my one to ones with the team, I could tell in their voices that they were enjoying what they were doing. You could really feel that this was a team, and the team was getting stronger every day. Everyone was praising each other and helping whenever they were needed.

I remember one day I walked into the train depot, and three members of the team were witnessing the strip and rebuild of a train gearbox. I observed them from a distance and I could see that they were working in harmony together, and they also had two members from the client team in harmony too. 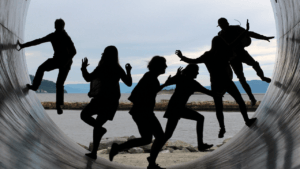 When they finished, Mark came over to me and told me about all the achievements for the week so far. I was so happy for them, and I couldn’t stop smiling for the rest of the day.

4. Allowing Your Leaders To Lead

I felt that I was part of the team, but really I was in the background. But, that was absolutely fine with me because I wanted the team to be the leaders. I wanted them to be on the journey to becoming highly effective leaders too.

All I did was set the tone and the vision for the team, they then took that vision and made it their own. They were inspired and had learned how to become inspirational and inspire others.

Over the whole year throughout the project, the team kept impressing me every day. Especially Mark and Dean, as they continued to motivate the team and inspire them to be the same as them. They led from the front, and led by example.

Mark and Dean were leaders, as were the rest of the team. But, Mark and Dean kept inspiring, they kept the team together without me needing to be there. The team loved working with them and would go the extra mile for them. It was amazing to witness.

I remember waking up every day when I was part of this project excited to go to work to see what the team were going to achieve. It was like going to a theatre every day. I would go to work and just observe the team at work.

I would grab a coffee with them at break times, and then when they went back to work I would watch them. It was one of the most pleasurable jobs I had ever had.

What are you going to do differently?

12 thoughts on “How To Inspire Others”