It takes character to put others before yourself, and do the right things for the right reasons. It takes courage to make the difference, especially when nobody else around you is standing up to the plate.

In 2008, I was beginning to deliberately adopt the leadership traits that you are reading in this article and in my other articles. One of the traits that I found difficult to adopt was “Have Courage.” I think a lot of people find this trait difficult.

Leading by example takes courage, especially when you are leading without authority through changing times. I had to do this on numerous occasions, and I have worked with a small number of people who done this too when we felt the need for change.

The reason for this was because our teammates were not doing anything to change things, even though they were unhappy.

Let me tell you a story to give you an example of this.

A friend of mine called Kevin worked with me in Liverpool for their train operating company. He was an outstation engineer, which means that when a train failed in service, he would attend the train to try and fix it, and get it back into service.

It was a demanding job because of the pressure from customers who were stranded on the platform, and were delayed in getting to their destinations. Sometimes he was hurled abuse from some customers. There were even some dangerous situations, especially when the customers were football (soccer) fans.

Anyway, Kevin had worked in the rail industry for about 20 years in 2010, so he had a lot of experience and knowledge.

The training for new and existing employees at our company was not the greatest in 2010, and there were a lot of complaints from people as you would expect. However, the people who were complaining had a lot of experience and knowledge too, and did absolutely nothing to change this situation.

The reason for that is because they were low performing leaders. They blamed the management and leadership for the lack of training, when they could have put a training package together themselves. 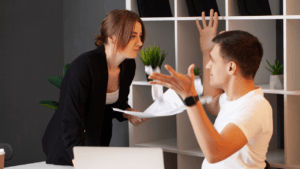 One day Kevin and I were having lunch and he asked me, “How are you getting on with your degree and graduate training?” I said, “I’m getting on fine, but I need to learn more about the engineering and operation of the trains. I don’t feel my knowledge is where it should be.”

So Kevin decided, “Right, after lunch I am taking you onto a train and we are going to start on building up your knowledge.” So, straight after our lunch that is exactly what Kevin did. He did this for a couple of weeks until my knowledge was in a better place.

2. Know What Kind Of Difference You Want To Make

I really thanked him for that, and I suggested to him that he would make a good technical trainer. And when I said that, he told me, “That is exactly what I want to do Tom.”

But, there was no position available or vacancy for a technical trainer, or any kid of trainer in our company at this point. However, this was a burning desire within Kevin and he wanted to change things to help out all of our teammates within our depot.

So, Kevin started doing to others what he did with me. He searched for people who needed to improve or refresh their knowledge on certain parts of the train, or in depot processes, and he taught them. He did this all off his own back, and people were improving.

But, most importantly people were happier that someone was training them. He was getting no extra pay or anything, he just did this when he had spare time in his day. Or, he would stay behind after work and teach. It was remarkable and very inspiring to see.

It was also very brave, because some people may have got the wrong impression and got offended because they had more experience than Kevin. The management and leadership may not have liked it either, but Kevin didn’t care.

He had the courage to do this, because he had the passion and the desire to do it. Performance of the teams was improving, and also the trains were staying longer in service without failing because they were being maintained better.

However, he had to keep this quiet at first because he wasn’t a qualified trainer, and the managers didn’t really know yet. Lots of the other engineers suggested to him that he should go to the managers and especially Kevin our director, and tell them what he had been doing.

But, tell them with the recommendation that they make him the technical trainer. Now, this would take a lot of courage because he was doing this training without permission.

So, Kevin put together a document and presentation proposal which outlined what training he had been doing, why he was doing it (most important), and the results that the depot were having following his training. He then arranged a meeting with the depot manager and the engineering director so he could present to them his proposal.

Kevin had not really presented before in his career, especially to a senior manager, and a director. So he practiced his presentation to me and a few other trusted teammates, and we all worked with him to make it the best it could be. He needed to make a few tweaks to his presentation and his delivery, but nothing major.

This would help him with his confidence, and most of all help him maintain his courage to go for this. We were all behind him, and we believed in exactly what he believed. We believed that we worked for a great company, but we needed a new technical trainer and training team. We believed that Kevin was the man to do it.

It was a Tuesday morning, and this was the day of reckoning for Kevin to pitch his proposal to the depot manager Paul, and the engineering director Kevin. So, he went into their office, fired off his presentation to them confidently, and then sat down to be questioned. 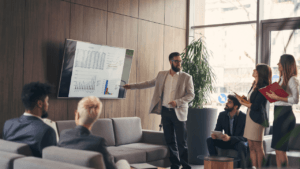 The first question was, “Why have you been doing this, and why do you want to become technical trainer?”

Kevin answered, “I first started this by training Tom Lawrence because he told me that he was lacking knowledge in the technical areas of the trains. So I helped him. I have a passion for where I work and who I work with, and I want us to be the best we can be at what we do. The training facilities and trainers are not good enough at present, and I am the person to change that.”

Kevin was asked a few more questions, and then was told that they would think about his proposal and get back to him. Two days later, the depot manager Paul and engineering director Kevin got back to him and agreed that he should become technical trainer.

Kevin was over the moon, he was ecstatic, and so was the rest of the depot. We were going to have the training department we wanted, and it was all down to our highly effective leader Kevin.

Kevin was a highly effective leader because he put his teammates and the depot before himself. He wanted to provide a platform for us so we can improve our knowledge, and most of all improve ourselves on being the best people we could be. I will always be grateful to Kevin for everything he did to help me.

When Kevin eventually took up the role as technical trainer, he created training packages and presentations for classroom training. These packages also included exams that had to be taken when the particular training package was completed.

The company put him through college so he could gain the training qualifications he needed. Then he needed to recruit a couple of people to help him put the training facility together. Overall, it was a huge success, and he is still working as technical trainer today and loving it.

If you think you have a weak leader, what are you going to do about it? This is your opportunity to take over and be the leader you wish you had.

22 thoughts on “How To Make A Difference”