As your influence increases with your team members, their influence will increase with each other and with other colleague’s too. It is your role as a highly effective leader to give your team the freedom to be influencer.

1. Spreading Your Influence Through Others

With your influence increasing cumulatively through your people, they will be connecting with others, and building strong relationships in the same way as you did with them.

As you prioritise personal growth and leadership development with your people, and you keep investing in their growth, yours and their influence will constantly becoming stronger. The more time you invest in your people, the bigger the benefit will be for both them and you. Investing creates a win-win situation for all.

Their mindset will change and they will want to do everything they can to increase your influence too. Soon, all departments throughout your organisation will have been influenced by you.

This really sounds great, and in theory will be amazing when your influence can be increased cumulatively through your team, then others, and then others beyond them. But, how do we do this in practice, and continue to work every day to ensure this happens.

With leadership development, constantly teach your team principles that will help them to lead themselves and others. As you do this, you are setting them up to increase your influence through them. Then, as you are training them to lead others, teach them principles that go beyond the world of work. 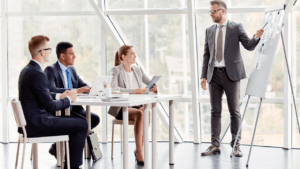 As you are beginning to be the best person you can be as a highly effective leader, by teaching your people to do the same, you will receive further support. They will increase their influence with you, and you can then leverage their influence in a positive way.

They are managers, not leaders of people, and they focus on processes, not people. Do your best to avoid this negativity, and don’t listen to it.

3. Investing In Your People

Whenever I talked to the low performing leaders about why I wanted to invest in my team’s leadership development and personal growth, I used to receive some “interesting remarks”. For example, “You’re not a trainer, why are you training your team?”

Or, “You’re not going to get the work done if you put the team first.” I found these remarks to be very amusing because I knew that by putting the people first, the job would take care of itself. How can you get the work done anyway, if you have a de-motivated team?

Even though I ignore the remarks I receive from low performing leaders, I would try my best to explain to them the reasons why I invest in my people, and teach them leadership. It would be better for them and the organisation if more leaders followed me in investing in their people.

If we have more and more leaders teaching their team’s leadership and personal growth, then imagine what kind of culture we would be creating. Imagine how far our influence could increase.

Low performing leaders only see things short term, but if we could convince them to change their mindset and think longer term, then our influence will compound.

Thinking long term, and having your vision at the forefront of yours and your people’s minds is what you need to focus on if we want to keep gaining buy-in from people.

For example, if I wanted help from an engineer who worked in a different team and had a different leader, it would depend on the relationship I had with his/her leader. As the engineer doesn’t report to me, I wouldn’t be able to go straight to them, I would have to ask permission. 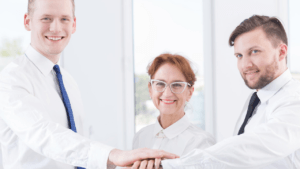 If I had a poor relationship with his/her leader, then they would probably say something like, “I don’t have time to let my engineer do some work for you at the minute. Maybe in the near future.”

By telling me that there is no time to let the engineer help me, is giving them a way out. There is always time to help each other, but because of the poor relationship, the leader is choosing not to help me.

I used to find this quite a lot when I took up my first leadership positions. I didn’t dedicate time to building strong relationships in the beginning, so I didn’t receive the co-operation I was looking for.

The reason I would find it easier is, the engineer was already influenced by me, so he/she would go their leader and gain their buy-in to supporting me and my team. The leader may not have been influenced directly by me, but their team member would use my influence to gain their buy-in.

Just as I had with them, and my own team members. Leveraging other people’s influence is a great way to get the support you need from outside your usual inner circle.

When your team, and others in your organisation know your vision, follow your vision, and want to support you, you will find that they will offer you help even when you don’t ask for it.

There is a saying, “It’s who you know, not what you know.” When it comes to increasing your influence far beyond yourself and your people, that saying could not be truer.

The more people you can influence, the better for you and for your people. As you influence others, listen to them. Embrace their ideas, lead them, and give them the freedom to influence. Allow yourself to be influenced by them.

24 thoughts on “Let The Team Be The Influencer”