In the previous articles, I have stated that LEADERSHIP IS INFLUENCE. I learned this from reading John Maxwell books, and watching his talks. If there is one leadership expert that I would recommend, then John Maxwell would be it.

1. Why Do I Talk A Lot About Influence?

The reason I say leadership is influence on a lot of occasions is because I want it to stay in your mind. So if anyone asks you the question in the future “what is leadership?” you will be able to answer them.

Everybody in the world can influence a person, so therefore we all have the ability to be a leader. What type of leader do you want to be? What level of leader? At the moment in your current position and as part of your team, you are more than likely a follower. However, being a follower is a trait of being a highly effective leader.

Allow me to explain.

It doesn’t matter if you are a team member working on a factory floor, or you are on the board of directors and you have your own office. If you choose to follow a person, you are a follower. The same applies, regardless of your position or authority, if a person chooses to follow you then you are a leader.

2. What Type Of Follower And Leader Are You?

I love to be a leader and a follower, no matter where I am in any organisation or what position I hold. You can be part of the two way street of leadership and followership. Following other members of your team will give them the chance to practice their leadership too.

A lot of people I have worked with, and more than likely you work with now do not want to be leaders, they just want to be followers. If you want to be a follower and not a leader then that is absolutely fine, as long as you work hard to be the best follower you can be.

However, ask yourself the questions “Why do I just want to be a follower?”, “Do I believe I can become a leader?” and “How much do I want to increase my influence?” 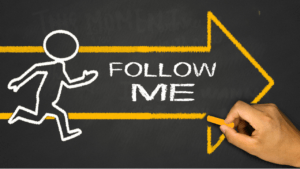 3. You MUST Increase your Influence

If one is missing then the leader will not have the right followers, they will only follow because they have to, not because they want to.

Followers who follow the leader because they have to will not have an influence on the leader, in fact they will have the opposite effect and wait for instructions, rather than being proactive. They would also have very little influence with their other team members, other than a negative influence.

If these followers are not careful, then their negative influence will spread across the team, and eventually the whole team will act in a negative manner. This includes the leader too.

Followers who follow the leader because they want to will definitely have a good and positive influence on the leader and their own team mates. They will even increase their influence with the wider teams in the department or organisation.

The impact of the follower on wider teams and other leaders can only enhance the output of the teams and the results of the organisation.

As a follower you will do a lot more with others than you will on your own.

4. How Does a Follower Increase Their Influence?

They add value to the organisation. Starting with their own leader, they do everything within their power to help their leader as much as possible. Going the extra mile and doing more than expected is how the follower can help the leader as much as they can.

They can also provide feedback on how things are going within the team and offer advice to the leader. The leader can then leverage their influence by praising the follower and highlighting them to the other leaders in the organisation. This will then resonate to other teams, who will then seek out the follower for their help too. 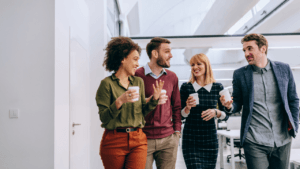 They value the organisation and the people within it. When valuing their organisation, this means people outside of their department (e.g. finance, commercial, and purchasing etc.). Showing respect to the other departments will definitely increase your influence as a follower, you will also receive respect too.

The person to value the most is the leader (Number 1 Customer). By doing your best every day for the leader and the team and increasing your quality of work each time, can only increase your influence in a very positive way.

They do their best to help other people to be their best. Building relationships with the team and throughout the organisation is how you increase your influence. A high influencing follower doesn’t just build relationships, they look to help others to succeed.

Especially the most that are in need of that help, not just the people they know or have the best relationships with. Ensuring that the team and beyond receive credit, rather than accepting the credit themselves. When the team as a whole takes the credit, the whole team’s influence will increase throughout the organisation.

Every person’s ideas are valued and listened to, and when an idea is pursued, it is a team effort, not an individual effort. It is definitely WE not ME.

They invest in themselves. A follower who has a high influence within the team and with their leader, really invests in their development and their personal growth. They are intentionally working hard on themselves to become influential leaders within their team, their organisation and in their own lives.

Influential leaders strive towards a goal or a purpose, and that purpose will resonate with other people and eventually they will become their followers.

As a new leader, the following doesn’t stop. They will still be following those who have led and still lead them. The only difference is that they now have their own followers. This is when they have completed the journey from follower to leader and their influence will continue to increase and be leveraged by others.

Even though they don’t have a job position of leadership, they are still a leader. So it will not be long until they are made the offer by the organisation of a leadership position.

Only YOU can make a start on your leadership journey.

Only YOU can make you stop your leadership journey.

Only YOU can make you start again and continue on your leadership journey.